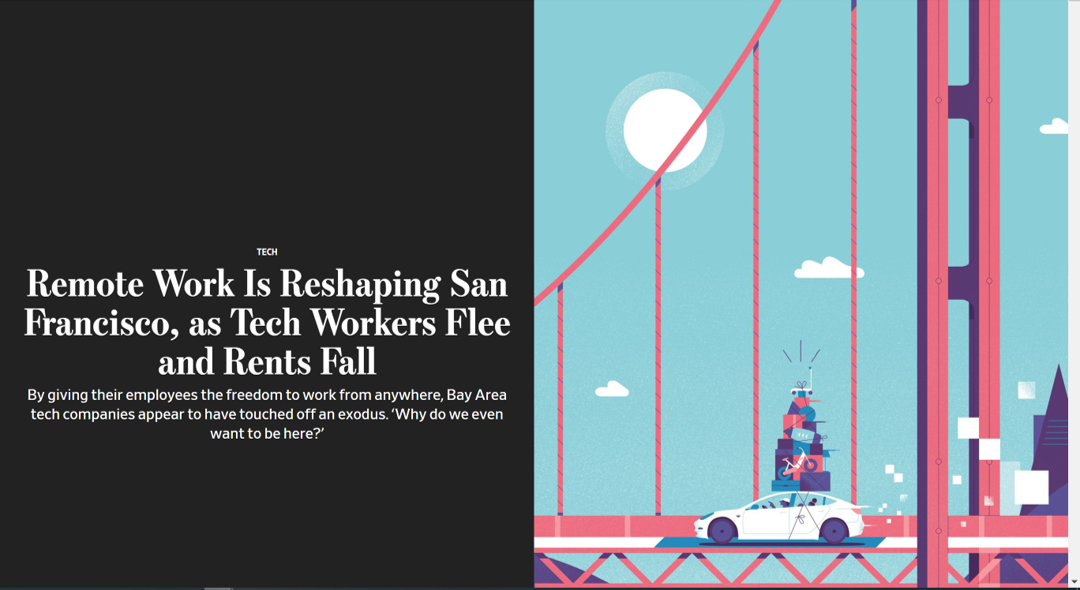 For years there’s been talk of a potential exodus from the San Francisco Bay Area, spurred by the exorbitant cost of living and long, slogging commutes. But before coronavirus, leaving the area meant walking away from some of the best-paying and most prestigious jobs in America.

There are signs the exodus is finally happening. Silicon Valley, America’s signature hub of innovation, may never be the same.

Tech companies are giving their employees more freedom to work from anywhere. Employees are taking them up on the option to relocate, forming the beginnings of a shift that could reshape not only the Bay Area, but also the cities where these tech workers are making new homes.

It’s early days, and information about who’s leaving and where they’re heading is just starting to come in. But for those who are looking, the evidence is there.

Two things suggested to Justin Thompson and his wife that they weren’t alone in deciding to move out of San Francisco this summer. After five years of renting an apartment, the couple had decided to buy a three-bedroom house in Phoenix.

First, their landlord offered to reduce their rent by $250 a month if they’d finish out their lease through October. (They declined.) And second, when Mr. Thompson went in for a dental checkup and said it would be his last, his dentist was unsurprised.

“He said, ‘I have people coming in almost daily telling me the same thing,’” said Mr. Thompson, who works for a data analytics firm.

Google-parent Alphabet Inc. last month said employees won’t be returning to the office until at least the summer of 2021, in part so they can sign one-year leases somewhere else. Facebook Inc. recently said its employees could stay away for that long too. The social-media giant, which has 52,000 employees, expects to shift to a substantially remote workforce over the coming decade, and is now recruiting a director of remote work. Other companies including Twitter Inc. and Slack Technologies Inc. have declared most of their employees can work remotely for good.

The pandemic has upended the job market. Whether you’re a new graduate, recently unemployed or contemplating a career change, the WSJ Jobs Summit on Sept. 1 will provide insight from industry leaders on how to thrive in this economy. REGISTER FOR FREE.

Cybersecurity firm Tanium, headquartered in Emeryville, Calif., across the bay from San Francisco, also told its 1,500 employees at the end of June that they could work remotely permanently. Since then, 16% of the workers based at Tanium’s headquarters have either formally requested or inquired about relocation, according to a spokeswoman. The company’s chief executive, Orion Hindawi, relocated to Seattle last month.

Around 40% of Facebook’s employees were interested in permanent remote work, CEO Mark Zuckerberg said in May, citing an internal survey. Three quarters of those employees said they might move to another place. Facebook declined to say how many employees have formally requested to relocate.

A survey of 371 Bay Area tech workers, conducted in mid-May by the recruitment marketplace Hired, found that 42% would move to a less expensive city if their employer asked them to work remotely full-time. Another survey at the end of July by Blind, a platform for workers to discuss their jobs anonymously, found that 15% of more than 3,300 Bay Area professionals who responded had left the region since the pandemic began—though it was unclear how many considered their moves to be temporary. Of those remaining, 59% said they would consider relocating if their companies allow it.

While it’s too soon to measure the total net outflow of tech workers from the Bay Area, it’s already affecting real-estate prices. Rents have started falling for the first time in years. The median rent for a one-bedroom apartment in San Francisco in the month of July dropped by 11% compared with the same month a year prior, according to rental-listings platform Zumper, which analyzed nearly 11,000 listings in the city and several surrounding areas. In Cupertino, home to Apple Inc., and Mountain View, home to Google, the median rent for one-bedroom apartments fell by more than 15%.

“The majority of techies in the Bay Area are not about to move out, but it is a significant enough minority that it’s moving the market,” said Zumper CEO Anthemos Georgiades. “This year is the first year that it’s actually real.”

While the pandemic has slowed or stalled rent increases in cities nationwide, San Francisco stands out, said Joshua Clark, an economist at real-estate search service Zillow. Rents in the city have fallen for the first time since the firm began tracking in 2014.

Those who are leaving the area permanently cite a variety of reasons, but high housing costs tend to be at the top of the list. Between 2009 and 2019, the median cost of a single-family home in the San Francisco Bay Area nearly tripled to around $1 million. Even renting a bunk bed in a room with five other people can cost over $1,300 a month.

The region is expensive in other ways too. Getting a cheeseburger and fries delivered can easily cost $25. An ice cream cone can cost $7. Before the pandemic hit, classes at boutique gyms routinely ran $30.

A large departure of tech workers could have significant implications for the industry, the Bay Area, and for other cities across the U.S. seeking to draw more tech jobs, say executives and analysts.

Surveen Singh, 30 years old, moved from Houston to San Francisco nearly six years ago for a job at a large tech company. She used to spend roughly three hours a day commuting between the city’s west side and her company’s headquarters in Silicon Valley. Like many tech workers, Ms. Singh would work while sitting in traffic on company-provided shuttle buses.